Free books on technology and the law - A reader's guide

A 19th Century Irish judge (Sir James Mathew) once said that "In England, justice is open to all – like the Ritz Hotel." Unfortunately, litigation has not become much cheaper in the meantime. But other aspects of the law have. In particular, there has been an explosion in the number of high quality books on law and technology available for free download - both free as in beer and free as in speech. Here are some of my favourites.

It's almost obligatory to start with Lawrence Lessig, who was one of the first lawyers to make his work freely available and was instrumental in setting up the Creative Commons movement to enable others to do likewise. Three of his books are available:

Free Culture is one of the more influential books on the use and abuse of intellectual property law and at the same time manages to be both readable and entertaining.

Code 2.0 scarcely needs an introduction. Lessig's analysis of how code can be used as a form of regulation, and the risks this presents, was an instant classic when first published in 2000 and this second edition confirms that many of his insights have become increasingly relevant in the meantime. 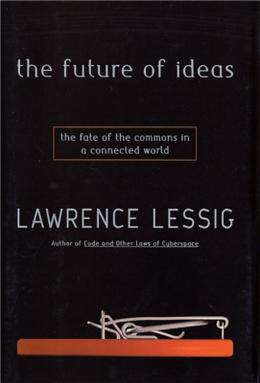 The Future of Ideas is another classic - covering much of the same ground as Code and Free Culture, it looks at what he calls the corruption of the values of the early internet, an internet counterrevolution which threatens to stifle creativity and innovation.

Building squarely on Lessig's work, Johnathan Zittrain's The Future of the Internet - And How to Stop It is a perceptive discussion of how the innovation and freedom permitted by an open internet is under threat from increasing restrictions both on the network itself and the devices which connect to it.

On a similar topic is Matthias Klang's doctoral dissertation, Disruptive Technology. He argues that new technologies "disrupt the, previously established, social norms that make large parts of our democratic social interaction" while simultaneously the regulation of new technologies may undermine democratic participation, for example by imposing contractual restrictions on speech online which would not apply offline.

The Wealth of Networks by Yochai Benkler covers some of the same ground, but has a different focus in arguing that a networked environment and a growth in the sharing of information (such as via Creative Commons licences) brings about deep, structural changes in society - notably a shift from markets to non-market social behaviour - which face resistance from a variety of entrenched incumbents who stand to lose out.

Turning specifically to privacy, Daniel Solove's The Future of Reputation is a superb look at the interaction of privacy, reputation and freedom of expression on the Internet, and takes a broad view of how social mechanisms such as shaming might develop online.

John Logie's Peers, Pirates and Persuasion is an interesting and enjoyable look by a non-lawyer at the growth of a maximalist copyright system and specifically the rhetoric used by each side in the "filesharing wars". (That link appears to be unreliable, but the book is also available on Scribd.)

Perspectives on Free and Open Source Software, edited by Joseph Feller and others, is a collection of essays covering a wide range of issues such as: the motivation of contributors to open source software, the security issues it presents, the business model underlying it, the challenge of open source for the legal system and the application of open source / free software principles in the world of science. This remains possibly the best introduction for anyone (lawyer or not) curious about free / open source software.

The OSCE Media Freedom Internet Cookbook is another must read. This collection of essays by various authors offers some very interesting perspectives on the challenges of reconciling individual and media freedom with regulation of the internet while also covering a variety of topics from "hate speech" to internet hotlines to education for media literacy. In particular, Gus Hosein's piece on the Open Society and the Internet is a perceptive look at the promises of and threats to internet freedom. 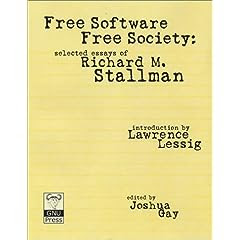 Last, but certainly not least, is a collection of essays by the individual who started many of these debates about opening software, knowledge and society. Free Software, Free Society: Selected Essays of Richard M. Stallman includes classic pieces such as "The right to read" and "Why software should be free".
Posted by TJ McIntyre at Tuesday, July 08, 2008