Time to put up the decorations... 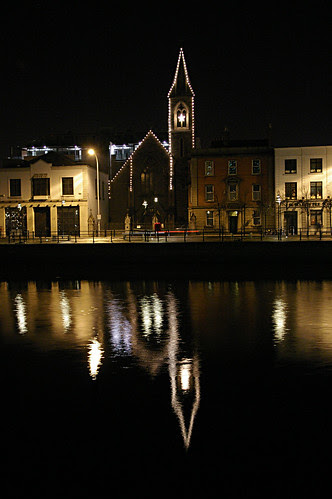 ...so here's a picture I took this time last year. Merry Christmas all.
Posted by TJ McIntyre at Wednesday, December 12, 2007 No comments:

More confusion about the legal status of eBay

New internet services sometimes don't fit neatly into the categories drawn by the law. eBay has been and continues to be a prime example. Is it an auction house? On its user agreement page it goes to some lengths to disclaim this status, for the good reason that it does not want the legal baggage that would go with it:

Although eBay is often referred to as an online auction web site, you acknowledge that we are not a traditional auctioneer. Instead, the Site is a venue to allow anyone to offer, sell, and buy just about anything, at any time, from anywhere, in a variety of pricing formats, which include auction-style and fixed price formats. At no point do we have possession of anything listed or sold through the Site.

But the French authorities don't agree and claim that it is subject to the same obligations as traditional auctioneers:

France's auction watchdog is taking eBay to court, arguing the Internet auctioneer does not do enough to protect consumers.

The regulatory authority, called the Council of Sales, said Monday that eBay's French site should be held to the same standards as France's auction houses, which need a special permit from authorities, partly to ensure consumers are protected.

In a statement, eBay's French branch, eBay.fr, said the legal action was "totally unjust." The French site has argued for years that it should not be subject to the same regulations as France's auctioneers.

eBay.fr says it is merely an intermediary, not a traditional auction house, because customers put objects up for sale themselves, and because the site is not involved in negotiating contracts or in delivery and payment.

"eBay has invented a new way of buying and selling, which has been adopted by 10 million French people, and which is not at all the same as that of auction houses," it said.

The Council of Sales, whose members are state-appointed, said it was not trying to crack down on online auctions.

eBay "has been an extraordinary success, which we recognize," said Ariane Chausson, the Council's spokeswoman. "We recommend that all auctioneers do sales on the Internet, because it's a fabulous tool."

But the regulatory authority hopes a judge will rule that eBay.fr is an auction house like any other. It argues that eBay.fr currently has an unfair advantage because it avoids strict regulations set out in a 2000 law.

Similar issues arise when we ask whether eBay is a "host" within the meaning of the E-Commerce Directive and if so whether it will be liable for the wrongdoing (such as trademark infringement or the sale of illegal goods) of its users. In one UK case the General Optical Council commenced a prosecution of eBay for aiding and abetting the illegal sale of contact lenses - but dropped that action after receiving advice that eBay would benefit from the hosting defence in Article 14 of the Directive. Lilian Edwards has more on this case - and suggests that eBay might lose the hosting defence on the basis that it is in a position to exercise control over its users:

[C]ould it be argued that the EBay sellers of contact lenses were acting "under the authority or the control of" EBay? EBay do contractually allow sellers to sell on its site, and take a cut of the profits for doing so. Is this not "authority"? As I have noted before, they are hardly in the same position as a traditional ISP handling myriads of communications in a hands off way. EBay furthermore do at least present something that looks rather like "control" in that they have various Acceptable Use policies relating to what can and cannot be sold on EBay. Contact lenses are specifically mentioned under the "prohibited" list. EBay do their best to make these warnings look advisory -

"eBay is here to help, but you are ultimately responsible for making sure that buying an item or selling your item(s) is allowed on eBay and is not prohibited in the eyes of the law. Follow these steps to find out whether or not your item can be listed on eBay."

- but such words cannot detract from the fact that it seems a reasonable interpretation that eBay's various "prohibited" policies for buyers and sellers are incorporated by reference as part of the terms of the contract with eBay.

More recently, Lilian has also blogged about a current French case which suggests that eBay (and many Web 2.0 sites) might not qualify as a "host" in any event:

[A] French humorist successfully sued MySpace before the Paris first instance tribunal for infringement of his author’s rights and personality rights, as his name, image and some of his sketches were published on a MySpace webpage without his authorisation.

The court found that MySpace performed the role of an Internet host. However it also did other things: it provided "a presentation structure with frames, which is made available to its members" and significantly, it also "broadcasts advertising upon each visit of the webpage, from which it profits".

As a result MySpace did not benefit from the hosting immunity of the EC Electronic Commerce Directive, Art 14 , implemented in Article 6.I.2 of the French law “on Confidence in the Digital Economy” (dated 21st June 2004) . The French law provides that a hosting provider:

“may not be held civilly liable for the activities or information stored at the request of a recipient of these services if they are effectively unaware of the illegal nature thereof or of the facts and circumstances revealing this illegality or if, as soon as they become aware of them, they have acted promptly to remove these data or make access to them impossible"

MySpace were however deemed not a host but a "publisher". Lacking immunity, MySpace were thus ordered to pay substantial damages.

The legal status of auction sites - along with search engines, content aggregators, hyperlinkers, bulletin boards, and Web 2.0 sites generally - is an area that was largely neglected in the E-Commerce Directive. Hopefully the forthcoming Commission review of the application of the Directive will give more guidance as to how national courts have dealt with these issues.

Update - 4.07.08 Lilian has still more on the French rulings finding eBay liable for the sale of counterfeit goods by its users.
Posted by TJ McIntyre at Wednesday, December 12, 2007 No comments:

The Copyright Association of Ireland Annual Lecture takes place on Monday next (17th December) at 6.30 in the Westin Hotel, Dublin. The lecture will be given by Ronan Deazley with the title "Plagiarist and Prophet: Walter Arthur Copinger and the Anglo-American Copyright Tradition". Ronan Deazley is an expert in the historical development of copyright and the author of the fascinating Rethinking Copyright: History, Theory, Language so this promises to be a very interesting evening. Admission is free and a reception will follow.
Posted by TJ McIntyre at Wednesday, December 12, 2007 1 comment:

The Barristers' Professional Conduct has made an interesting ruling on the admissibility of telephone conversations recorded by one party. (The decision was in 2006 but appears not to have attracted much attention then.) From the Sunday Business Post:

The Barristers Professional Conduct Tribunal has ruled that a recording of a phone call by a barrister allegedly racially abusing his Romanian client is admissible in proceedings for professional misconduct...

The Bar Council is investigating claims that the barrister, who was acting for the wife, divulged private information about him in a phone call to his secretary. The woman tape-recorded the remarks...

The barrister’s counsel argued that the tape was inadmissible because it had been made without his consent, so was in breach of the Postal and Telecommunications Services Act 1983.

He also claimed that it violated the barrister’s constitutional right to privacy and breached the European Convention on Human Rights. But the tribunal ruled that the 1983 act had been amended by the Interception of Postal Packets and Telecommunications Messages (Regulation) Act 1993.

Under that legislation, a telephone conversation can be legally recorded by one of the parties involved, without the other’s consent. Tribunal chairman John Gleeson SC said:

"The fact that one party to a telephone conversation records it does not, in the opinion of the tribunal, give rise to a constitutional difficulty or a breach of the European Convention on Human Rights.

"After all, a party to a telephone conversation is always capable of giving evidence of the contents of that conversation without any recording apparatus, whether by making a contemporaneous note or by simply recalling in evidence what was said during the conversation."

René Rosenstock has more discussion of the legal issues associated with recording telephone calls in Ireland. The Data Protection Commissioner has a case study on the data protection issues involved here.

(Many thanks to Ronan Lupton for pointing out the Sunday Business Post story.)
Posted by TJ McIntyre at Thursday, December 06, 2007 1 comment: