Eircom admits user disconnection is illegal; wants other Irish ISPs to do it anyway

You couldn't make it up. Eircom, not content with shooting itself in the foot by agreeing to introduce a "three strikes" system which wasn't required by the law, now wants its rivals to do the same. Presumably that would be the same three strikes system which Eircom's head of public policy has admitted is in breach of European law.
Posted by TJ McIntyre at Monday, March 26, 2012 No comments:

The Supreme Court yesterday gave a decision on internet defamation in Coleman v. Mirror Group Newspapers, where it held that the Irish courts had no jurisdiction in relation to a photograph said to have been published on the Mirror website in 2003. The judgment turns for the most part on deficiencies in pleading rather than on the substantive law so is of little precedential value, but it does highlight the fact that the courts will not rely on "presumed" publication in this jurisdiction - there must be evidence that online material was actually read by a person within the jurisdiction in order for a defamation claim to be brought:

Email ThisBlogThis!Share to TwitterShare to FacebookShare to Pinterest
Labels: defamation

User consent to privacy policies is a fiction - here's why 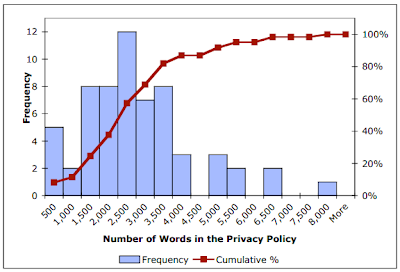 One simple answer to our privacy problems would be if everyone became maximally informed about how much data was being kept and sold about them. Logically, to do so, you'd have to read all the privacy policies on the websites you visit. A few years ago, two researchers, both then at Carnegie Mellon, decided to calculate how much time it would take to actually read every privacy policy you should.

Next, they had to figure out how many websites, each of which has a different privacy policy, the average American visits. Surprisingly, there was no really good estimate, but working from several sources including their own monthly tallies and other survey research, they came up with a range of between 1,354 and 1,518 with their best estimate sitting at 1,462.


From TheAtlantic.com. The full study (PDF) is well worth reading.
Posted by TJ McIntyre at Tuesday, March 13, 2012 No comments:

Witness comments on Facebook cause assault case to be dismissed

This may be the first time in Ireland that a case has been dismissed on the basis of Facebook comments. From the Mayo News:

A WOMAN who wrote comments on a Facebook page about an alleged assault was told her actions had ‘fatally compromised’ the assault case which was subsequently dismissed.

Judge Mary Devins told last week’s sitting of Ballina District Court that in her view writing messages on Facebook was akin to writing in newspapers.

She made her ruling after hearing evidence from Maureen O’Malley from Westport, who explained that she posted two messages on Facebook about an alleged assault by the CEO of a Ballina laboratory against an animal rights protester.

Leonard Moran of Carrentrila, Ballina, was accused of assaulting Laura Broxon from Dublin. He was accused of punching her in the face while wielding a hammer when she was staging a protest outside the Ovagen and Charles River Laboratories, which are adjacent to Mr Moran’s house.

Mr Moran, who is a Director of Ovagen and who used to own the lab until it was sold to US company, Charles River in 2002, denied he punched her. Ms Broxon, who is the founder of the National Animal Rights Association, claimed that testing of animals takes place in the lab and during the protest accused Mr Moran of having ‘blood on your hands’...

Detective Garda Pat Ruane explained that two comments had been posted by Maureen O’Malley, who admitted posting them.

She told the court last week that she arrived at the scene after the incident had taken place and had spoken to Ms Broxon, who explained what she claimed happened. She said was shocked at what happened and posted the comments when she went home.

In the first comment, she posted that the CEO of Charles River had assaulted a protester, and in the second comment she asked why he would resort to physical violence and what he was capable of doing to ‘defenceless animals in his lab’.

Judge Devins said that even though she wrote the comments with good intentions, writing about something on Facebook can compromise a criminal prosecution. She said it was akin to a local or national newspaper giving their version of events and dismissed the case.

Based on this report, it's difficult to see precisely why the charge was dismissed. There was no jury and therefore no real risk of the comments improperly influencing the decision maker. The mere fact that a witness has previously written about what they saw - even publicly - is not in itself a basis for dismissal of charges. In addition, there was no suggestion that the comments could influence other witnesses in the case. Most importantly, the equation of Facebook comments with newspaper coverage is simply incorrect and seems to reflect a misguided analogy with the law regarding contempt of court and the sub judice rule. While social media does present genuine challenges for the law, it would be unfortunate if judicial unfamiliarity with the internet were to lead to unnecessary problems for the criminal justice system.
Posted by TJ McIntyre at Wednesday, March 07, 2012 No comments:

Two years ago the Sunday Times broke the story that the Irish national children's hospital was illegally keeping blood samples from almost every Irish newborn since 1984, in what amounted to a de facto national DNA database. Two years later, the decision has finally been made to destroy these samples. From today's Irish Times:

MINISTER FOR Health Dr James Reilly has decided to have more than a million archived blood samples taken from newborns destroyed within the next four to six months.

Cardiologists have called on the Minister to reverse the decision, describing it as “appalling”. They say the samples could be particularly valuable in genetic tests for diagnosing sudden adult death syndrome.

Dr Reilly is to follow the recommendations of a Health Service Executive review group to destroy heel-prick screening cards that are more than 10 years old.

The department plans to give individuals and their families the chance to access the cards or have them returned. Most of those affected would now be aged between 10 and 28...

Until recently parents were not asked for consent to keep the samples. Parents have had the right to opt out of the test since a 2001 Supreme Court judgment.

Since July 2011 parents have been asked for consent to take the samples, with agreement to allow storage for 10 years with use only for tests to which they agree.

Action on the issue came about after the Data Protection Commissioner found in 2009 that the retention of the cards breached the law, following a complaint from a member of the public. The commissioner proposed that the retained samples be destroyed.

The HSE review group report seen by The Irish Times said that retaining samples without consent “clearly contravenes both EU and national data-protection legislation”. It is “extremely important” that the screening programme was “not undermined or compromised in any way”, it said.

Using the samples for research or another purpose “compounds only further that initial wrong”, it said.

The destruction of the old samples “serves to respect the autonomy of the individual”, the report concludes.