The first Irish case on defamation via autocomplete

Another story lost behind the Sunday Times paywall last week was Mark Tighe's piece on what seems to be the first Irish case alleging defamation via Google's autocomplete system:

A FAMILY-OWNED hotel in Louth is suing Google because it says the search engine giant gives web surfers the mistaken impression it is bust. The four-star Ballymascanlon House hotel, located outside Dundalk, has applied for a High Court injunction to prevent the Google search engine from suggesting it is in receivership.

Ballymascanlon is not in receivership and the Quinn family, who have run the hotel for 70 years, say it is trading successfully.

The hotel, one of the most popular wedding venues in the northeast, says it has been contacted by brides who had booked weddings there and were "in tears" after seeing the Google prompt.

Mark Collier has an excellent post setting out the background to this case and more details, from which I've borrowed the following image showing the offending search terms: 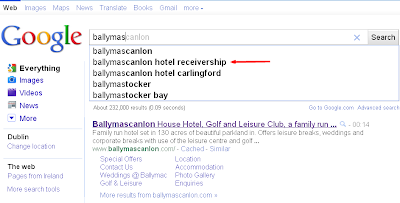 This isn't the first time Google has been sued over autocomplete suggestions - it recently lost similar cases in France and Italy - and the case raises a fundamental issue as to whether Google should be treated as responsible for the suggestions which it claims merely reflect the most popular user queries. Undoubtedly (if the case makes it to trial) Google will rely heavily on the recent English judgment in Metropolitan International Schools v. Designtechnica, in which it was found not to be the publisher of defamatory snippets in search results on the basis that:


When a snippet is thrown up on the user's screen in response to his search, it points him in the direction of an entry somewhere on the web that corresponds, to a greater or lesser extent, to the search terms he has typed in ... it is for him to access or not, as he chooses. [Google] has merely, by the provision of its search service, played the role of a facilitator.

In this case, however, it may be that Google will face difficulties in running that defence. Looking at both Metropolitan International Schools and the recent Italian judgment, three factors seem likely to be important. First, unlike the case of search results, autocomplete suggestions do not merely reflect what is elsewhere on the web but are created by Google (albeit by algorithm). Second, as Google actively censors the autocomplete system it makes it harder to argue that there is no "human input" into the results - a factor which was critical in Metropolitan International Schools. Third (although the judgment isn't entirely clear on this point) the court in Metropolitan International Schools found it signficant that Google could not block all searches against particular terms without also blocking a great deal of unrelated material. In this case, however, it would seem quite simple to remove a particular autocomplete result for this hotel, ruling out any argument based on practicability or collateral damage.

Incidentally, I see from the High Court search that the action is listed as QUINN [SENIOR] & ORS -V- GOOGLE IRELAND LIMITED 2011/4784 P. I was surprised to see Google Ireland named as a defendant, as I understand that Google's search functions are run by Google Inc., California - a distinction which tripped up the Red Cross in their action seeking to identify a blogger hosted on Google's blogspot. In that case the Red Cross eventually had to seek the permission of the court to substitute Google Inc. as the defendant, and I'll be interested to see whether this happens in this case also.
Posted by TJ McIntyre at Sunday, June 12, 2011