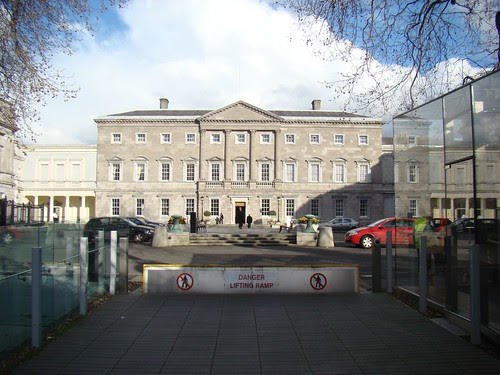 I appeared today along with my colleague Fergal Crehan on behalf of Digital Rights Ireland before the Oireachtas Joint Committee on Transport and Communications which is currently holding a series of hearings on "Social Media Ethics and Regulation". There's a good summary of the proceedings in the Irish Times but the masochistic amongst you can watch the whole thing here. Our slides and Fergal's very comprehensive written submissions are embedded below.

I won't rehash here the substance of the discussion, but I should say that we got a very fair hearing from the Committee whose members - following four separate sessions on the topic - are now very familiar with the issues (previous sessions: 1|2|3). They were quite receptive to the argument that greater resources are needed for the Data Protection Commissioner and the Garda Computer Crime Investigation Unit, and I suspect that they were as shocked as I was to discover that there is currently a three year backlog for that unit to investigate child pornography cases.

The hearings as a whole were also useful in highlighting current practice in sites such as YouTube and shedding some light on the otherwise rather opaque Office for Internet Safety in the Department of Justice. I was disappointed though that there was no evidence from domestic social networking sites such as Boards.ie - the larger international players such as Facebook, Twitter and YouTube operate in a very different environment, not least in the resources they have, and it would be unfortunate if the Committee were given the impression that they were typical of social media sites generally. I don't know whether the domestic absence is because local sites didn't seek to be heard, or whether they weren't given time - but either way it seems to me that these sites would benefit from joining forces and possibly setting up a group to represent their views. In any event I look forward to seeing the Committee's report.

Social Media and the Law: Presentation to Joint Committee on Transport and Communications